Thoreson: In the early and middle part of the nineteenth century there were many tearful departures from Norway, the “Land of the Midnight Sun”. They were tearful because there was little hope that those leaving would ever be able to return for a visit with those left behind. But through these tears these sturdy Norwegians saw visions of a new and better life in America, a “land of prosperity.”

When these emigrants reached the United States they divided into many groups, some stayed in the eastern states and others wended their way westward.  Many families spent weeks, yes, even months, slowly migrating to the Midwest where land was plentiful and cheap. These people were Vikings possessing strong mental and physical endurance, traits which helped them to cope with the many hardships they were to encounter.

In the spring of 1852 a group emigrated from Tolgen’s Prestegjeld, Osterdalen, Norway. Most of them came by train to Chicago, then trudged wearily by oxen team to settlements in northern Illinois and southern Wisconsin. Some of these people settled in Koshkonong, Wisconsin (near Jefferson), among them being Ole and Olava Thoresen (Ryttergaard). They remained in this area for three years during which time their son Theodore was born. Many of the men in this and nearby settlements worked in the lead mines in southern Wisconsin in order to earn enough money to purchase land.

In 1855 the Thoresen family moved to Leon Valley, Monroe County, Wisconsin. Two children were born while they lived here, Bennett and Kjestina. Bennett was only sixteen years old when he died and Kjestina thirteen.

Theodore married Kathrine Bekkedal on May 20, 1873 in Melvina and remained on the home farm for four years. Their son Bennett Christian was born to them during this time. The family then moved to Bloomingdale in 1877 where Theodore started a business. A son Oscar Martinus was born here but lived only six months. In 1881 Theodore and his family moved to Westby, a new Norwegian settlement growing rapidly because of its location on a railroad line. Another son, Elmer Mark, was born the following year but lived only a year.

In 1883 Theodore opened a furniture store and operated it for four years. In 1884 Theodore and his father went into the lumber business forming a partnership with E. T. Saugstad (Katharine’s brother-in-law) to whom they sold their interest two years later. They then started the Westby Planing and Feed Mill, later expanding the lumber business. Theodore was a contractor and built many home and business places in Westby and surrounding area. Most of the business places in Westby were built by him, among them being the Stevlingson and Call building, E. J. Svein building, the Bekkedal-Unseth block, the Dahl block, and the T. J. Thorson building as well as the two Coon Prairie churches.

Bennett attended a business school in Des Moines, Iowa, then in partnership with William Bratlie operated a grocery store in Starbuck, Minnesota for a few years. He then joined his father in the lumber business. On July 18, 1900 he married Mathilda Jefson. To them were born six children: Theophil Milpher, Berna Katharine, Helen Lorene, a baby girl (stillborn), Myron Rossmore and Elton LeRoy.

Bennett was very active in community affairs. He served as a volunteer fireman for many years, served on the school board for several terms, was a member of the board of the telephone company for many years, was president of the village of Westby and was the first mayor of the city of Westby. He suffered a stroke and was an invalid for four years before his death at the age of sixty-four.

Bekkedal: Among the groups which came from Feiring, Norway in the spring of 1854 were Ole Thoreson Bekkedal and his son Thor Bekkedal, Thor’s wife Maria and their seven children, Kathrine being the youngest, about a year and a half old. They came by train to Milwaukee where they bought a team of oxen and continued westward. They settled in Canaan Valley, Monroe County, Wisconsin. Their son Joachim was born to them here. Maria, the wife and mother, died soon afterwards. Kathrine, then three years old, went to live with a married sister, Mrs. Oluf Odemark, in Taylor, Tempeleau County, Wisconsin. After she was confirmed, she worked in a bakery in Sparta, Wisconsin. It was here she met Theodore Thoreson who was building a house in that city.

Another group emigrated from Biri, Norway in 1855. They came to Chicago by train and then started out for Norwegian settlements in northern Illinois and southern Wisconsin. In this group were Mathas and Bertha Evenson and their son Nels Anton, a year old. Their first born, a daughter Tonette, had lived only a few weeks and was buried in Norway. Mr. Evenson became ill with dysentery, so the Evenson family remained in Woodstock, Illinois where Mathias died three weeks later. Bertha and her son then moved to Coon Valley, Wisconsin. In 1868 she married Mathias Gjefsen (Jefson) who had come from Gausdal, Gudbrandsdalen, Norway in June 1857. They settled on a farm in the town of Webster near Bloomingdale.  Six children were born to them of whom Mathilde was the third oldest.

Many stores have been told of their pioneer life in the two-room log cabin: being threatened by floods, being vaccinated by members of their own family, being attacked by a blow snake, walking five miles to confirmation classes, etc. Mathias died in 1891 and soon afterwards the remaining members of the family moved to Westby. Their first house was near the Theodore Thoreson home. When a second railroad line was built through Westby this house had to be moved to make way for the tracks and the family moved to another part of town. Bertha suffered from rheumatism for twenty years, unable to walk the last six years of her life.

Mathilde became a dressmaker and worked in La Crosse for several years, staying at the home of her half-brother Nels Matson and his wife. For a short time before her marriage she worked in a millinery store in Westby. Her death at age 68 was due to cancer.

Theophil (Trip) worked for a time in the family lumberyard, later worked as a carpenter and contractor. He was married to Helen Blihovde with whom he had a daughter Janice. This marriage ended in divorce. He later married Lenore Rude Nelson who had a daughter Yvonne. During World War II he served as a civilian engineer on Atta, one of the Aleutian Islands off Alaska. His death at age 55 was the result of a concussion suffered when he fell from a ladder.

Berna graduated from St. Olaf College and taught school in Illinois and in Huntley and Aitkin, Minnesota. She then became secretary to the superintendent of schools in Fairmont, Minnesota and later became the payroll accountant of the school system there at which position she remained until retirement.

Helen attended St. Olaf College for two years, then graduated from Miss Woods Kindergarten School in Minneapolis. She taught kindergarten and worked in the school offices in Oregon, Wisconsin until her marriage to Elmer Knitt. They lived for a time in Clintonville, Wisconsin and in Meadville, Pennsylvania. Elmer served in the Air Force during World War II, most of the time being stationed in the Pacific. During this time Helen taught kindergarten in Westby and worked in the lumber office. On Elmer’s return from the service they settled in Westby. Elmer started a concrete mix plant in Westby, later moving the plant to Viroqua. They then built a home halfway between Westby and Viroqua. They adopted three children: Bernice Kay (Mrs. Donald Stalsberg), Timothy Ray, and Eileen Ann.

Myron worked in the family lumber yard for a number of years and during World War II served in the Pacific. He was married to Valera Plikuhn and to them were born three children: Larry Duane, Nancy Jean (Mrs. Jon Borgen) and Kathleen Joanne (Mrs. Gary Grohovena). They moved to Chicago in 1957 where Myron worked as a carpenter.

Elton graduated from Tri-State Engineering College in Angola, Indiana. He enlisted in the Army soon after graduation and was stationed in England and on the continent. He served in an engineering unit setting up air bases as soon as the area was regained from the Germans. While in England he met Coral Ladbrook whom he married during the time he was stationed in France. They lived in Westby for several years while Elton worked in the lumber yard. They lived for a short time in Beaver Dam, Wisconsin before settling down in Sheboygan where Elton was the purchasing agent for a lumber company. They have a daughter Cheryl Margaret and an adopted son David Gordon.
Posted by Hans Jørgenson at Saturday, May 17, 2014 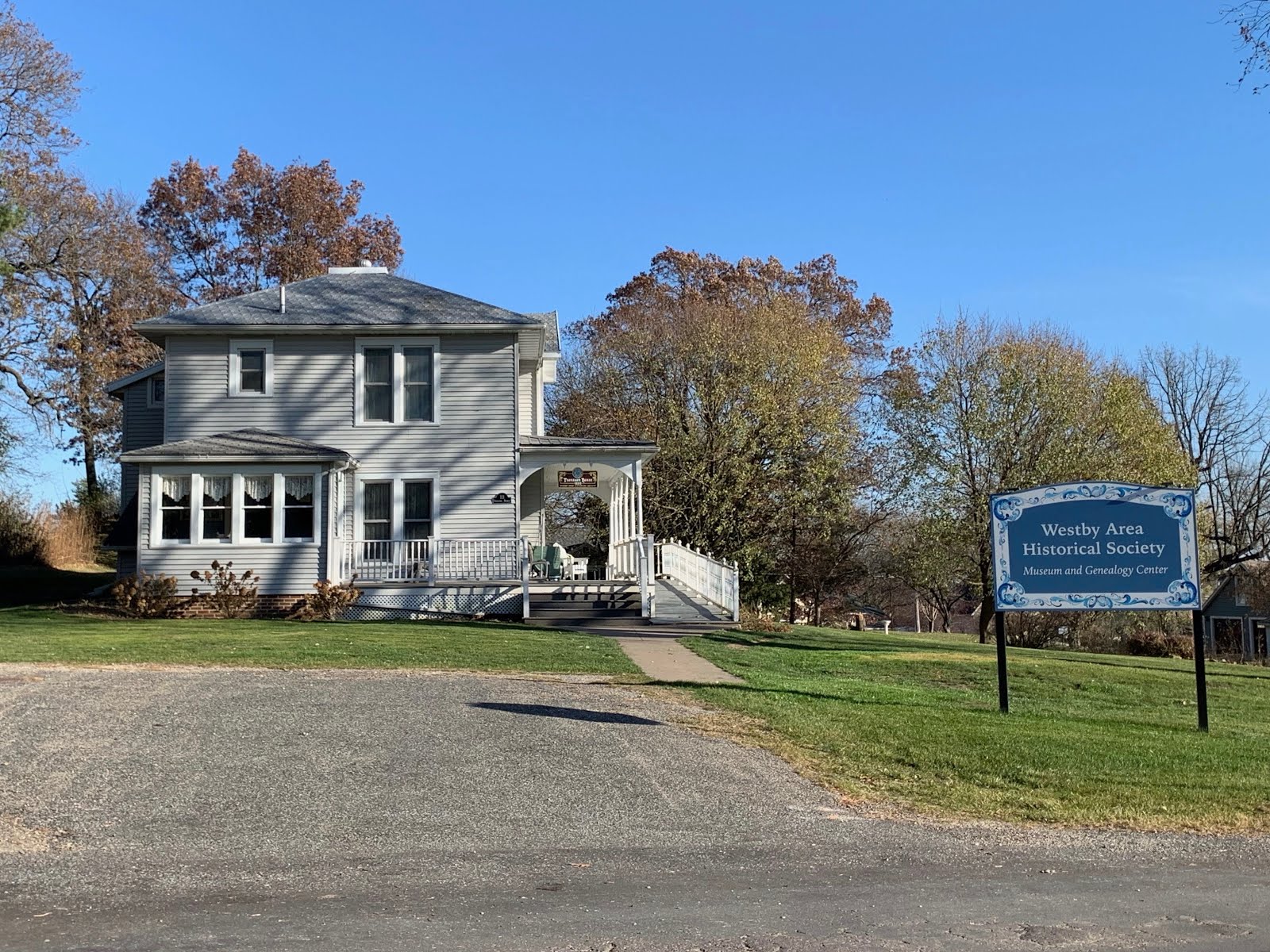 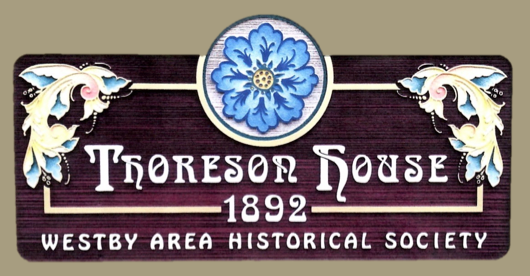 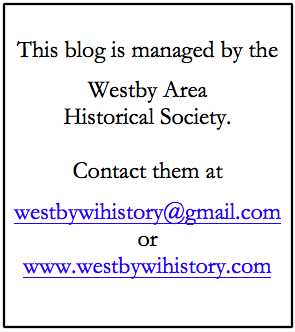 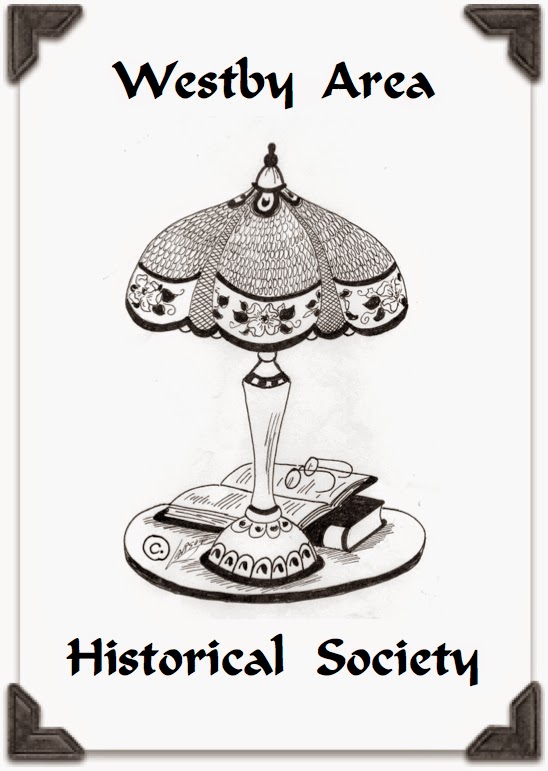